An interview with Steve Riley 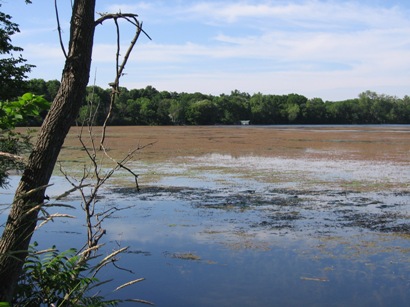 This is NOT Lake Namakagon. But it is not far away. A boater leaving this lake with Eurasian Watermilfoil [EWM] right now could launch in a Bayfield County Lake in about three hours. We’ve stopped them before and must continue our efforts to stop them again. Your help is needed to stop the next EWM carrier from reaching your lake. The threat is real. The next boat that launches could be the one that does this to your lake.

This is a photo of Lake Minnetoka. EWM was found there in 1996. Since then it has spread throughout the lake, eliminating much of the recreational opportunity, including boating and swimming in many areas. Two drownings have been caused by this plant, including one UofM Swim team athlete who was in training. Property values around the lake have plummeted. Waterfront owners have seen a reduction in values from 30% to 50%. Each spring there are two harvesters that operate full time and don’t stop until fall. The cost is near $200,000 just to keep the harvesters working. Hundreds, sometimes thousands of boats launch and land each day on Minnetonka. Some of these boats have carried EWM to many other lakes, including those in northwestern Wisconsin.

IT IS ESSENTIAL THAT WE KEEP OUR BAYFIELD COUNTY LAKES FREE OF EWM AND OTHER INVASIVE SPECIES.

Read this interview with Steve Riley of the NLA and you will gain a good understanding of this problem . . . and how we can and must protect against it.

Lake Namakagon lies in the southeast corner of Bayfield County. This 3,200 acre lake is very popular, especially with fishermen. Much of the lake is shallow. Its large beds of native aquatic plants make great cover for this good fishing lake. Because of its shallow nature and its close proximity to the 11 lakes in Sawyer County that are contaminated with Eurasian Water milfoil, some feel that Namakagon is at very high risk of invasion from this devastating plant. DNR stats show that, although any boat can bring invasives into a lake, it is the rare, irresponsible or unaware fisherman who is most likely to transport invasive plants. There is good reason for concern. Many ‘weekend anglers’ who come to our region visit three lakes a day. It is just a short hop from Sawyer County’s 11 contaminated lakes through the fire lanes to Lake Namakagon.

Steve Riley, former VP and acting President of the Namakagon Lake Association (NLA), lives on Lake Namakagon’s Missionary Point. He is well known for the work he has done to keep invasives out of the lake. He writes AIS grants, supports stronger AIS laws, recruits volunteers to monitor landings, recruits others through his conversations about lake protection and much, much more.

When the video capture cameras we now see on many landings, known as ILIDS, became an option, Riley reached into his own pocket and offered to fund the first ILIDS system himself, provided other lake residents funded a second ILIDS system. They did. That gave Namakagon two ILIDS cameras for their 8 landings. Knowing this was not enough, Riley, with a nod from the NLA Board, then applied for and received a grant from WDNR for two additional ILIDS systems that will be installed this spring. The Lake Namakagon chain of lakes was the only grant applicant to receive ILIDS funding from WDNR in the entire State of Wisconsin during the last grant cycle.

I sat down with Steve Riley to learn more about the NLA’s work to stop AIS and just what compels him to work as hard as he does to protect Lake Namakagon. Here’s the gist of our conversation:

JB: Steve, you’re well known for your effort to protect our lakes from invasives. What’s behind your personal ‘drive’ to keep Namakagon AIS-free?

SR: Having grown up on Lake Minnetonka and owning a second lake home on Lake Sarah which is just West of Minneapolis, I have seen firsthand what Eurasian Water Milfoil can do to a lake. Boating is curtailed, swimming is impossible if not dangerous and there are literally no viable alternatives short of poisoning the entire lake, which DNR will not allow, to get rid of this particular invasive. My parent’s home on Wayzata Bay is located on 100’ of West-facing frontage just 10 minutes from downtown Minneapolis. Mom and I used to go for a swim down the shoreline whenever we could and I will always remember those precious times we had together. That all ended, however, when Eurasian Water Milfoil ruined the entire shoreline.

JB: Do you recall how the Eurasian Water milfoil spread in the lake or the bay?

SR: I first noticed it in Gray’s Bay which is adjacent to Wayzata Bay. Due primarily to boating activity, it spread rapidly to the rest of the lake. Now they use harvesters to try to mitigate the damage but that also has the effect of allowing the milfoil to spread further. It can establish itself easily in up to 20’ of water.

JB: What kind of impact did it have on boating and other recreation?

SR: Good question. Let me give you just one personal example. I used to own a 22’ Supra inboard ski boat that had a 335HP fuel injected engine. You’d think milfoil couldn’t stop something that powerful but you’d be wrong. While the prop can indeed chop through the milfoil, small pieces of the invasive can & do enter the engines cooling system. When that happens the flow in that system is restricted & the engine overheats. Fortunately for me, when that happens the engine automatically shuts down. Were that not the case and if the operator failed to notice the engine temperature gage, a fire & possible explosion could result. Outboard motor water filters & cooling systems are affected as well. And good luck swimming in that stuff.

JB: How did the spread of EWM affect the sale of your mother’s Minnetonka lake home?

SR: When the estate sold my parents home four years ago, our realtor told me that were it not for the milfoil, the home would have sold for somewhere between $500,000 to $1,000,000 more than it did. At the upper end of the scale, that represents 33% of the value of the property. Waterfront owners can estimate the negative impact Eurasian Water Milfoil could have on their lake property at 30% or more. Nobody wants recreational property where swimming, boating, fishing and even jet skiing are inversely impacted!

JB: Steve, by my count, Namakagon has well over 400 waterfront homes in addition to all the resorts on the lake, not to mention all the yet undeveloped property. The total value must be near a half-billion dollars and the property tax must be near $5 million annually. Cut by 30%, it would result in a loss of $1.5 million in tax revenue. Imagine what that would do to the county and town services!

SR: That’s why it is absolutely imperative that all of our town and county officials to do everything they can to support the efforts to stop invasives before they arrive at our lakes.

JB: Your latest DNR Lake Planning Grant will purchase two new ILIDS cameras. It specifies that the NLA must provide trained CB-CW inspectors at the launch sites. How will the NLA handle this?

SR: We will have a mix of paid and volunteer inspectors. We already have a few trained monitors. Finding more volunteers is up to the current NLA Board but, from past experience, it’s like pulling teeth, hence the dependence on the ILIDS systems.

JB: Some folks simply don’t have the time and won’t give up a day at the lake to spend at the landing. What would you say to them?

SR: I’d tell them that after invasives are established, when they finally get “religion” and it’s too late, good luck selling their property or enjoying their lake. If they can’t give up one day for the good of the lake then they should donate enough to cover the wage of a paid monitor.

JB: Steve, why not just let EURASIAN WATERMILFOIL come, then get the government to clean it up?

SR: Because even if the DNR had the money, which it doesn’t, there is no way to effectively treat this stuff. Plus, once EWM is in the lake, it’s there for good. It will always come back. Always. The only defense is prevention.

JB: When was the first ILIDS landing camera installed?

SR: Three years ago. We review the videos on a periodic basis as does Environmental Security Systems, the manufacturer of the ILIDS equipment. They provide various monitoring options. In the case of the systems on the Namakagon Chain, NLA Board member Dr. Denise Dupras, who is both a Mayo Clinic practitioner and professional photographer, is the person in charge. And she does an outstanding job and cares as much about the lake and environment as any person I know.

JB: Do you think these cameras make a difference in the boater’s behavior?

SR: I know they do for a fact. The videos prove it. It’s not uncommon to see people get out of their vehicles, peer into the camera lens, look back at their boat and then go inspect it. Dr. Dupras has noted other interesting behavior that I’ll not comment on, but it’s pretty hilarious. Needless to say, they do have a positive impact. Are they intimidating? Perhaps, but so what? They’re not as frightening as lake choked with thick mats of milfoil!

JB: Some boaters say the ILIDS cameras are just one more invasion of privacy by the government. How do you respond to this claim?

SR: Obey the law and they will have nothing to worry about. But know this: the Bayfield County DA has personally advised me that citations issued based on photographic evidence will be prosecuted.

JB: Wisconsin has tightened up the ‘no-transport’ laws, making it illegal to have attached plants and animals on boating equipment when on any roadway. What effect do you think this will have on boaters?

SR: It’s a great improvement and we have our local State Senator Bob Jauch, (D) Poplar to thank for that as well as the Great Lakes Compact. Senator Jauch is a great advocate for the environment.

JB: The Bayfield County Lakes Forum succeeded in getting the first AIS transport law passed in Wisconsin, then later got the penalties increased and helped get the legislature to pass a statewide no transport law. What AIS issue would you like to see BCLF tackle next?

SR: Fishing tournaments who allow their contestants to jump from lake to lake during their events. That should be either banned outright or monitored at tournament expense for compliance with Wisconsin statutes.

JB: Where do you think this is all headed? What’s your vision of this lake in 20 or 50 years?

SR: It really depends on the people who enjoy our lakes. If they educate themselves about AIS, clean their equipment, support the programs by volunteering or donating and teach their kids to do the same, we can keep our lakes clean and healthy until we find effective treatments for invasives, Jim. But it takes everyone.

JB: What’s your parting statement to the 3,000 owners of waterfront property who will read this newsletter?

SR: First, learn all you can about the problem. Second follow the AIS laws and make sure every boat you launch is AIS free. Third, support your local AIS program by volunteering and donating a few bucks. Don’t rely on others. Please get involved lest you live to regret it! It’s really up to you.
See EnvironmentalSentry.com for more images plus video clips of ILIDS cameras in use. This website also has a tool that allows you to calculate the potential risk of AIS contamination faced by your lake.